Lifestyle | Things to do in Limousin

Home › Lifestyle › Ride the Vintage Steam Train Across the Haute-Vienne

Ride the Vintage Steam Train Across the Haute-Vienne 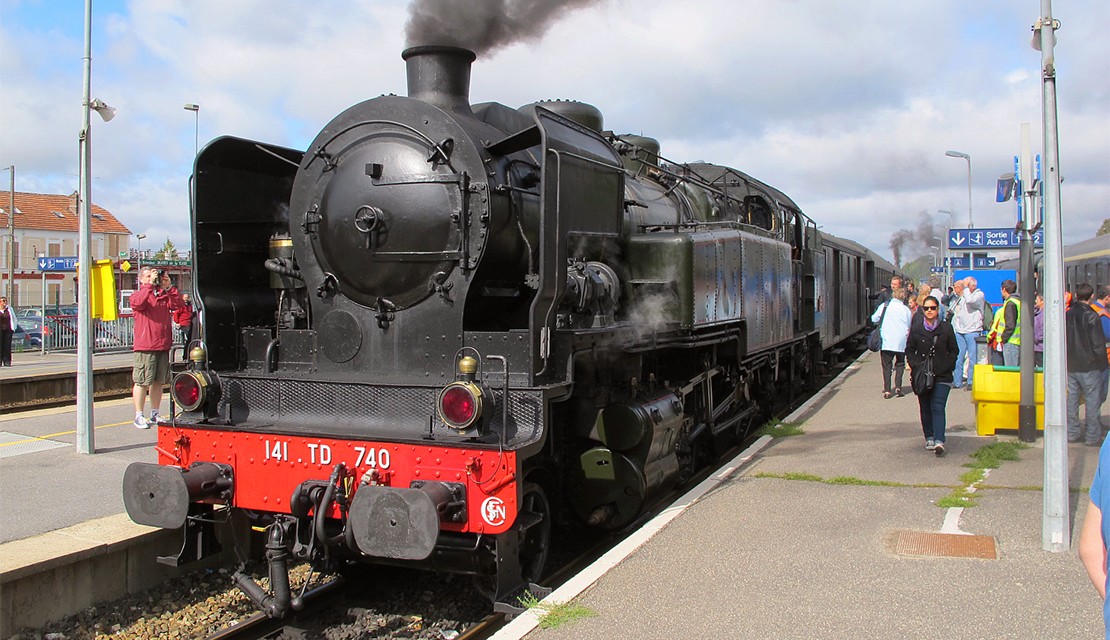 We begin our “Things to do in the Limousin” series of blogs with the nostalgic Steam Train of Limoges.

Onboard the magnificent ‘Train a Vapeur’, you’ll step back in time to experience an atmospheric journey exploring the spectacular countryside of the Haute-Vienne.

Since 1981, the wonderful volunteers of the non-profit organisation C.F.T.L.P have been working tirelessly to keep the magic of the steam train alive. They offer charming routes to take you through the heart of the Limousin countryside during the holiday seasons.

The locomotive you’ll find at the station at Limoges was built in 1932 and had worked hard to pull a commuter train in Paris for nearly 40 years! It was actually on its way to the scrap yard when the C.F.T.L.P association saved it just in the nick of time! It certainly was worth rescuing because its engine was declared a historical monument just a few years later.

Le Train touristique à vapeur 141 TD 740 en Limousin from mikedupontdenoblat on Vimeo.
You’ll get to sit in antique carriages mainly built in the 1950s, and if you are lucky, you’ll experience the journey with a live soundtrack from a jolly accordionist playing all the traditional favourites!

There are three circuits to choose from:

The Gare de Limoges-Bénédictins is considered one of the most beautiful train stations in the world with its eye-catching Art Nouveau and Art Deco architecture. From what better place could there be to catch a glimpse of a wonderful steam engine making its grand entrance onto the platform? Climb aboard to be taken along the River Vienne over and under bridges, viaducts, and tunnels to discover dramatic gorges and lush, unspoilt landscapes.

The train will let you off at the medieval waterside town, Eymoutiers, where you’ll have ample time for a spot of lunch at one of the many lovely local restaurants or perhaps a picnic in the  Parc du Pre beside the river.

There will be time also to visit the fascinating Mineral Museum or the Rebeyolle Museum of Contemporary Art, or you could instead choose to visit the craft market for some souvenir shopping. How you decide to spend your time in the historic town of Eymoutiers is up to you before you hop back on the train and return to Limoges later in the evening.

This two and a half hour round trip begins from the Eymoutiers S.N.C.F. station and will take you to the delightful little village of Bugeat. Here you will discover the Millevaches Plateau, the highest point in the region, offering you fantastic views across the Limousin.

An online informational commentary accompanies this trip, and you’ll have the chance to visit an exhibition offering information about the locomotive plus, depending on the season, a fabulous display of traditional folk music and dancing before your return.

This route takes you through woodland and valleys until you arrive at the pretty little town of Brignac, located on the banks of the River Vienne. The trip includes a walking trail, so be sure to wear comfortable shoes. You’ll walk 2 km to the Moulin du Got, a working paper mill, where you can experience a specially organised guided tour.

You can dine locally or find a spot by the river to picnic, and then finish the outing with a 3km trail that brings you back to St Léonard station, where the train will be waiting to return you to Limoges.

Visit the website http://www.trainvapeur.com/ to see this year’s summer timetable, for more information and to book your tickets.